Pallywood is alive and well


Once again in the conflict with the Palestinians, the media is being manipulated with photos and videos that are either false or taken at a different time or place.

a) In this first case, the so called “injured” man was “miraculously” cured and photographed moments later walking around normally. Pictures in the “incident can ber seen at http://tinyurl.com/bncb6ew  and a video of the same “incident” at http://honestreporting.com/exposed-pallywood-returns-to-gaza/ 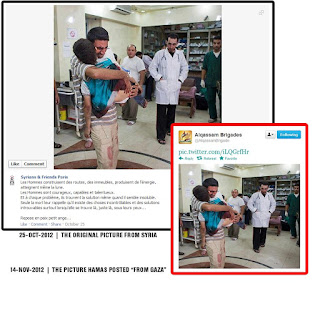 There will probably be many more such Pallywood picturess in the coming weeks.
This link gives yet another example and also tells you how you can check any photo out to see its first use on the Internet: http://unitedwithisrael.org/how-to-check-if-a-photo-is-current/