It was billed as the first Iranian delegation to Israel since the fall of the Shah 42 years earlier. Six Iranian Muslim dissidents, forced to leave their homeland decades ago and who made their way to the United States, came on a three-day solidarity mission last week to show support for the Jewish state following the May clash between Israel and Palestinian terror groups in the Gaza Strip—namely, Hamas and Palestinian Islamic Jihad—that have long been backed by Iran.

Accompanying the group were four former Trump administration officials, including Ellie Cohanim, former U.S. deputy special envoy to monitor and combat anti-Semitism at the U.S. State Department, who described the visit as “historic.” Cohanim was born in Tehran and escaped with her family shortly after the Iranian Revolution in 1979.

“They know that Hamas, which rained down these rockets on Israel, is an Iranian proxy, and they know that Hezbollah on the Lebanese border is an Iranian proxy,” Cohanim told JNS. “And they wanted to show the Israeli people, but also the world, that they support Israel in its right to a country and its right to self-defense, and they really just stand against the Iranian regime.”

The mission was organized by the Institute for Voices of Liberty (IVOL), a U.S.-based nonprofit that seeks to “counter the false narratives propagated by the Islamic Republic and its apologists,” and to act as a voice for the “freedom-seeking people of Iran.”

The group’s whirlwind tour of Israel included stops at the northern border with Lebanon and Syria, and at the southern border with the Gaza Strip. They also met with officials at Israel’s Ministry of Foreign Affairs.

The ministry tweeted on Sunday: “It was an honor to meet these brave individuals.”

Posted by Haifa Diarist at 6:51 AM No comments:

Noam Bedein has been documenting the changes in the Dead Sea since 2016 and travels the world presenting his findings to raise awareness for this beautifully weird body of water.

Bedein’s “Dead Sea Story” website includes his photographs of salt formations covered with water, then later peeking out to sparkle under the hot Israeli sun.

These four time-lapse photos show the dramatic changes Bedein has documented with his camera. 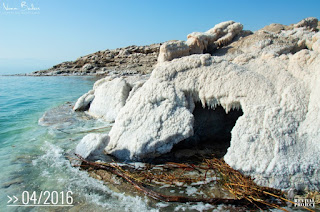 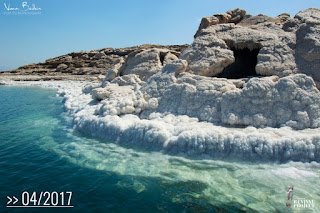 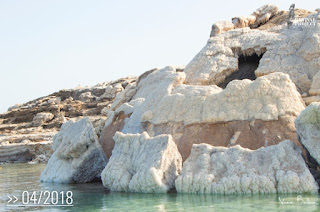 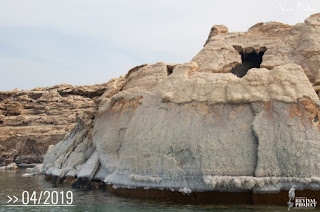 Posted by Haifa Diarist at 1:32 PM No comments:

Since its inception, Israel has not been allowed to take its existence for granted, like every other nation on earth.

Although Israel is just a “dot” on the map, there are more international journalists in Israel per capita than in any other place in the world. The eyes of the world quite literally watch and judge whatever takes place there.

Even after decades of independence, the existence of the State of Israel is still not recognized by some states and international bodies, while others are even pledged to bring about its destruction. In addition, criteria of judgement which differ from those applied to any other nation, are applied to Israel.

Having achieved independence, Israel still found itself in an ongoing battle  for recognition and for its right to life. Under constant threat of violence or war, Israel’s achievements have, nonetheless, been remarkable:

It has taken a neglected, desolate landscape and turned it into a place of farms, forests, nature reserves, and thriving towns.

It has taken immigrants from a hundred countries, speaking eighty languages, and turned them into a nation.

It has taken a people, devastated by the Holocaust, and given the opportunity to make a life for themselves.

It has created a modern economy, with almost no resources, other than the creative gifts of its people.

It has sustained democracy in a part of the world that has never known it before.

It has taken Hebrew, the language of the Bible, and made it speak again.

It has benefitted the world with many innovations in every sphere of human endeavor.

One of its many challenges is the blatant falsehood that Israel is the aggressor; that it has not sought peace. The choice is not between supporting Israel or supporting the “Palestinians”, but between peace or violence. Peace is sacred, violence a desecration. Too many lives have been lost, and too much blood has been shed.

Defense for Children International – Palestine Section – How Sick is This?

Defense for Children International-Palestine (DCI-P) is a Palestinian NGO that claims to promote Palestinian children’s rights. However, numerous individuals with alleged ties to the Popular Front for the Liberation of Palestine (PFLP) terrorist organization have been employed and appointed as board members at DCI-P. The PFLP is designated as a terrorist organization by the US, EU, Canada, and Israel.

DCI-P seeks to convince government officials, UN bodies, and the general public that Israel is systematically abusing Palestinian children. This campaign, known as “No Way to Treat a Child,” provides false and inaccurate information regarding Palestinian minors and their interaction with Israeli legal and security frameworks. DCI-P receives funding from UNICEF-oPt – UNICEF’s branch in Israel, the West Bank, and Gaza – and serves as an NGO “implementing partner” on various UNICEF projects. DCI-P is also member of UNICEF’s child protection Working Group, ostensibly charged with monitoring and reporting on violations against Palestinian children (see NGO Monitor’s report “UNICEF and its NGO Working Group”).

In addition to funding from UNICEF, DCI-P has also received support from the Human Rights and International Humanitarian Law Secretariat – which was a joint NGO funding mechanism of the governments of Sweden, Switzerland, Denmark, and the Netherlands.

Posted by Haifa Diarist at 10:05 AM No comments:

Genocide, Ethnic Cleansing and the PA Posted by Haifa Diarist at 10:32 PM No comments:

How can one build trust within the population when some Arab citizens of the State are doing their utmost to destroy it?

Yaakub Abu al-Qian, a Bedouin millionaire and who was a candidate to serve as a Member of Knesset, was arrested on June 10 on suspicion of maintaining illicit contacts with a Lebanese-Iraqi source and through him with Iranian intelligence, to whom he passed information, the Shin Bet revealed Monday.

The investigation revealed that Abu al-Qian, 46, who is close to public figures in Israel and was a candidate to run on Moshe Yaalon’s Telem list in 2019, had a longstanding relationship with Hyder al-Mashhadani, who serves as a liaison for Iranian intelligence.

As part of the connection, Abu al-Qian provided him with updates on what is happening in Israel.

The connection between the two also revolved around possible business opportunities in Arab countries in the region.

The investigation also shows that Abu al-Qian asked at a certain point to meet with other operatives through Hyder al-Mashhadani, while he understood that these were Iranian elements and even emphasized the secrecy of the planned meeting between the parties.

In the end, despite Abu al-Qian’s willingness, the meeting did not take place.

Abu al-Qian was held in the Shin Bet’s custody after his arrest without contact with a lawyer, as is customary in espionage cases.

Abu al-Qian’s investigation was concluded this week. The Southern District Attorney’s Office filed a serious indictment in the Be’er Sheva District Court charging him with contact with a foreign agent and providing information to the enemy.

A multi-millionaire, Abu al-Qian owns a contracting company that builds residential and public buildings in Bedouin localities. He also owns a manpower company in the fields of construction, cleaning and agriculture, and enjoys business and financial connections in the Palestinian Authority.

Initially from the Bedouin village of Hura in the Negev, he resided in recent years in the upscale Jewish town of Meitar, just outside Be’er Sheva.

Posted by Haifa Diarist at 10:25 PM No comments:

The Israel-South Korea vaccine agreement disproves the Palestinians’ claim that it rejected 1 million doses of coronavirus vaccines because they were too close to their expiration date.

Israel and South Korea signed a mutual vaccine supply agreement on Tuesday which will “facilitate the effective utilization of the present and future vaccine inventories of both countries.”

According to the agreement, Israel will immediately transfer approximately 700,000 doses of the Pfizer vaccine to South Korea for the vaccination of its citizens by the end of July.

In June, the Palestinian Authority rejected 1 million doses of coronavirus vaccines from Israel only hours after a deal was announced, claiming the doses were too close to their expiration date.

Israel disproved that claim, both by administering the doses to its citizens and by signing the agreement with South Korea.

In the exchange announced on Tuesday, South Korea will return the same quantity of vaccines to Israel from a future order in September-October 2021.

This is the first agreement of its kind for the exchange of coronavirus vaccines that has been signed between Israel and another country.

“The State of Israel welcomes the agreement and sees mutual advantages in it for both Israel and South Korea,” the Prime Minister’s Office stated.

Posted by Haifa Diarist at 8:59 AM No comments:

The UN - Ideology or Truth?

From 2006 to 2019, the UN Human Rights Council condemned Israel 85 times
– more than double any other country, notes Arab-Israeli activist Yoseph Haddad.
Regimes like Iran received only nine condemnations and North Korea 12,
he adds. “Is Israel really so much worse than all other nations?”
The UN Security Council “should be ashamed of itself,” says Israeli Ambassador
to the UN Gilad Erdan.

Both men stress how important it is to continue fighting for the truth at the UN.

Posted by Haifa Diarist at 11:50 AM No comments:

Posted by Haifa Diarist at 10:51 AM No comments: