Like everything else about the Jews, probably there is not a people in the world who have a national anthem which has gone through so many countries, and versions of its origins.  It’s been wandering around for centuries,  until finally coming to rest in Palestine at the end of the 19th century. The real story of Hatikvah mirrors the story of the Jewish people – complex, convoluted, controversial.

An ardent Zionist, Naphtali Imber moved to the land of Israel in 1882, and in 1886, he published his first book of poems in Jerusalem, which included “Tikvateinu” (our Hope). His passionate poem strongly expresses the ancient hope of the Jewish people to return and reclaim their ancient homeland. It was adopted as the anthem of the “Lovers of Zion”, and later of the Zionist Movement at the First Zionist Congress in 1897.

In its current version, Hatikvah incorporates only the first stanza from the original poem. The remaining stanzas focus on the establishment of a sovereign Israeli nation, a hope fulfilled with the founding of the State of Israel.

“Wherever you look at Hatikvah, there is a story. Peel off the layers and you will see that, not only is there an endless history, there is also a yearning for an eternal future.” That is what concert pianist and musicologist Dr. Astrith (Esterita) Baltsan wrote in her book, “Hatikvah – Past, Present, Future.” 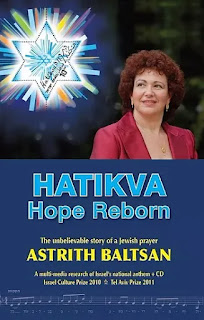 In her multimedia presentations given over 350 times in 17 countries, in four languages, Dr. Balstan dividies Hatikvah into three parts: melody, lyrics and orchestration. Each element of the song, she said, proved the strength and unity of the Jewish people. She also detailed the histories of those involved in creating the song, and shared her amazing discoveries.

Most people attribute the music of Hatikvah to the familiar Smetana piece “My country”. This is not true. Actually, it was picked up by 12 year-old Amadeus Mozart who heard the folk tune in Italy and incorporated it into one of his compositions. He took the music to Prague where Smetana adopted it and it became part of his Czech nationally inspired symphony poem.
Dr. Baltsan discovered in her revolutionary research, that the melody is a Jewish Sephardic version of “Birkat Tal”, the prayer for dew, written by Rabbi Yitzchak Bar Sheshet in Toledo, Spain,  in 1400.  [On the first day of the spring festival of Passover, Jews still today change one line in their daily prayers: instead of asking God for rain, they ask God for dew].
After the expulsion of the Jews from Spain in 1492, the Jews who fled Spain found temporary refuge in Italy, Holland, Balkans, etc. That explains how the tune of the prayer for dew meandered around Europe and emerged in several versions, including a 16th century Italian love song; a 17th century Baroque fugue; a Mozart piano variation; a Swedish symphony, and others.
This tune is one of the two musical themes of Hatikvah. The Jews have come full circle from 600 years ago – which began with the Jewish prayer for dew. The second theme echoes a Romanian farmer’s folk song.
It is a song of hope, sung in joyful times, as well as tragic. In 1944, Czech Jews spontaneously sang it at the entry to the Auschwitz-Birkenau gas chamber and, as reported by a member of the Sonderkommando, were beaten by SS guards.

There is a remarkable recording of an open-air service in Bergen-Belsen, held on the first Shabbat after liberation by the 11th Armoured Division of the British Army on April 15, 1945. The BBC’s veteran broadcaster, Richard Dimbleby, sounded on the verge of tears as he witnessed the survivors singing Hatikvah. “Around us are corpses that there has not been time to clear,” said Dimbleby.

History had long ago decided that this song  (“Our hope has not yet been lost/The two thousand-year-old hope,/To be a free people in our own land”) would be the national hymn of the Jewish people. Until 2004, it  was sung by everyone but chosen by no one. Given Israel’s diverse population with a myriad of opinions, it took the government 56 years to reach a consensus and officially select Hatikvah as its national anthem.
Posted by Haifa Diarist at 11:46 AM No comments:

IDF intelligence have released the surveillance footage
of Iranian Quds Force operatives in Syria carrying a killer drone
that they intended to use for an attack on Israel. This killer drone
attack could have been deadly for Israeli. Thankfully Israel destroyed
the drone before the attack.
Posted by Haifa Diarist at 11:40 AM No comments:

The UN is Failing the World

The U.N. is supposed to be helping the world, not hurting it. But they are so twisted. They criticize democracies like Israel and ignore violations of human rights and international law. The U.N. cannot even seem to condemn terrorist organizations like Hamas. Bayefsky points out many things that make the United Nations a failing institution. One obvious point she makes addresses an absurd aspect of the U.N. It is so absurd that it is almost laughable. Many of the member states are themselves violators of the worst human rights abuses in the world. They are terrorists. Dictators. Against democracies. They are against everything the U.N. is supposed to stand for!
Posted by Haifa Diarist at 9:22 AM No comments: 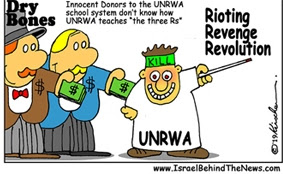 When will donors to UNRWA realise how
their money is being used?
Posted by Haifa Diarist at 10:44 PM No comments:

Palestinians: In Need of a Mirror?

§  The Palestinian Authority's silence over the murder of the Jewish teenager sends one clear message to the Palestinian public: It is fine to kill a Jew.

§  Abbas's silence, in fact, encouraged many Palestinians to express joy over the terrorist attack.

§  It was hard to find even one Palestinian who was willing to express his or her revulsion over the terrorist attack. But this makes sense. Why should any Palestinian come out against terrorism when their leaders are either silent or joyously celebrating the murder of a Jewish teenager?

§  This is the hate that has been embedded in the hearts and minds of Palestinians toward Israel and Jews. When Palestinians run to link the Palestinian slaughter of a Jewish teen to a Muslim feast and the tradition of sacrificing sheep, it is clear that the time has come for Palestinians to take a hard look at themselves – and if they are nonetheless unwilling to do so, perhaps the international community might finally bring a mirror to them.

Posted by Haifa Diarist at 9:58 PM No comments:

Women's Right - The UN has got it wrong!!

Countries that are notorious for women's rights violations try to hijack
the language of social justice to spread lies about Israel.
Posted by Haifa Diarist at 9:29 PM No comments:


By the end of this year, my research and travels in the Middle East will have brought me through Bahrain, Abu Dhabi, Dubai, Israel, the Palestinian territories, Jordan and Kurdistan, as well as many visits to Capitol Hill.

What I’ve learned from security, defense and intelligence officials is this: When Israelis and Arabs talk off the record, what they say differs markedly from their public statements. America policymakers are too often unaware of what Israeli and Arab experts and official say behind closed doors, even to one another.

This may not come as much of a surprise but it does mean that the American public, not to mention elected officials, are often ignorant of the full breadth of information needed to understand the most important issues going on in the Middle East.

As Jonathan Spyer, a leading Middle East analyst, told me after his most recent travels, “It’s very important for Western policymakers to be aware that leaderships and elites throughout the Arab world today find a great deal of common ground with Israel on the issues of the Iranian and Sunni Islamist threats.”

“To an increasing extent,” he continued, “they are also weary of Palestinian intransigence and see Israel as a model for successful development. Much of that, however, cannot be said openly by these leaders because this does not reflect the views of parts of the societies of the leaders in question, where Islamist and/or Arab nationalist sentiments continue to hold sway.”

Today, despite some public lip service to the Palestinian cause, the Sunni Arab world knows that the Israeli-Palestinian conflict is at most a “side issue.”

I recently interviewed an Israeli military intelligence expert who had just returned from private meetings in Europe with Arab and EU officials. He told me that behind closed doors, their analysis of the Middle East, including Iran, is often light years away from the public rhetoric offered by European — and to a lesser extent, Arab Sunni government officials — to their citizens and the world at large.

When politicians or pundits make foreign policy critiques, unaware of what is discussed privately between insiders in the Middle East, the public is misinformed.

Most Americans don’t realize that the conflicts of the Middle East are primarily tribal and religious in nature, and that the primary allegiance is not to modern states artificially constructed by the West 100 years ago, something Arabs and Israelis know all too well.

Too many Americans fail to realize this, but insiders know that if there were no Israel, the Shiites would still hate the Sunnis, Iran would still aspire to hegemony, Turkey would still be an unreliable NATO ally and Libya and Yemen would still be chaotic.

Some European officials, who vociferously defend the Iran nuclear agreement publicly, privately acknowledge the dangers of the Iranian revolutionary theocracy that acts against their values, from the hanging of gays to the Iranian complicity in the Syrian genocide, the ethnic cleansing of Sunnis in Iraq and Syria and the population transfer of Shiite families from Pakistan, Iraq and Afghanistan into Syria.

Europeans have long tried to have it both ways, appeasing illiberal Middle Eastern states and actors in the hope that terrorism won’t land on its shores, while rhetorically taking a value-based foreign policy position that ignores the worst players in the region while saving all of their criticism for the only democracy that shares their values.

It is common today to unfriend people whose viewpoints do not corroborate one’s own world view. Removing oneself from the opportunity to engage in dialogue that conflicts with one’s own perspective makes it easy to delegitimize any differing viewpoints and creates an increasingly more insular social media community.

It would be illuminating for American policymakers if they could hear what is said privately about the Middle East among intelligence, security and defense officials.

Not making an attempt to understand the Middle East beyond the talking points of like-minded sources is a prescription for America to get dragged into another Middle East war in the not-too-distant future.

When the gap between public policy statements and a fully informed politician is wide, the chances for miscalculation leading to dangerous policy recommendations greatly increases. The pieces of the Middle East puzzle do not fit into a Western frame, and we ignore this at our peril.

Posted by Haifa Diarist at 11:01 PM No comments: