Israel is enjoying a resurgence of agricultural and food tech innovation, grabbing the attention of the world’s largest multinationals in the field, a new report has revealed.


According to data published by non-profit Start-Up Nation Central, the country’s agri-food tech sector is taking advantage of scientific advances and quickly gaining momentum in its efforts to disrupt global food production.

More than 350 hi-tech firms operate in the agri-food field, with approximately one-third established during the past five years. Since 2016, 124 start-ups were founded – exceeding the total number of companies established in the previous six years.

In 2018, agri-food firms secured $103 million in equity investment, putting Israel on par with, and even exceeding, far larger countries including Australia and India. Funding records have already been broken again this year, with investments reaching $115m. by September. Companies including DouxMatok, Aleph Farms and Fieldin have led the largest investment rounds.

Israel is well-known for its “first wave” of agricultural innovation, notably the invention of drip irrigation to overcome the country’s arid environment, and the development of cherry tomatoes. Irrigation company Netafim, dairy cow monitoring developer SCR and flavor firm Frutarom are just some of the leading Israeli companies that have become synonymous with agricultural technology.


Responding to the second wave of growth in the agri-food tech sector, representatives from the world’s largest food and agriculture multinationals participated in Israel’s AgriFood Week, that was held recently in Tel Aviv.
Posted by Haifa Diarist at 11:37 AM No comments:


Because the sanctity of life is of primary concern in Judaism, Jews throughout their history have come to the rescue of their brethren - in whatever means they were able to effect. This imperative to save a fellow Jew began at the very beginning of Bible times when Abraham rescued his nephew Lot. [Genesis 14:14]       .
Ethiopian Jews, also known as Beta Israel (House of Israel), are believed to have emigrated from ancient Israel to Ethiopia between the 1st and 6th centuries. Although many of their members were forcibly converted to Christianity in the 19th and 20th centuries, Ethiopian Jewry continued to secretly observe many Jewish traditions and holidays, and remained steadfast in their Jewish faith. Like thousands of Jews around the world, the Ethiopian Jewish community prayed for centuries to return to the Land of Israel.
From 1983–1985, Ethiopia suffered a devastating famine. In desperation, thousands of Ethiopians—Jews among them—fled to neighboring Sudan. Entire families, including the elderly, the infirm and young children, made the trip. To make matters worse for the Jews, Ethiopia was targeting Jewish inhabitants with government-sponsored persecution. Over 1,700 refugees died en route, victims of bandits and wild animals. Those who survived the 400-mile [644-km] trek were housed in wretched refugee camps just inside the Sudanese border, suffering hunger and disease. Almost 4,000 more refugees died in the camps.
The Israeli government realized the plight of their Ethiopian brethren and authorized “Operation Brothers”, the first secret mission designed to bring Ethiopian Jewish refugees to Israel. It would have to be top secret, for Sudan and Israel were longtime enemies.
Israeli operatives, posing as Swiss businessmen, purchased an abandoned resort on the Sudanese seacoast and began the process of fixing up the place. They then advertised the resort in travel agencies across Europe. The holiday village became known as Sudan’s premier recreation centre, and hundreds of guests descended on the resort throughout its 6-year operation – never suspecting that it was the front for the Mossad (Institute for intelligence, special operations and counterterrorism).
The agents, former Israeli naval commandos, posed as scuba diving and windsurfing instructors, while female agents were tasked with managing the resort. The rest of the staff were hired locally, including “stealing” a chef from a Sudanese hotel!
The trips to the Sudanese refugee camps were arduous, made under cover of darkness. The Mossad hired men inside the camps to seek out the Jewish refugees, and gather them for pickup at a rendezvous point. They were then transported by truck for two nights over rough roads to the resort, put into dinghies and ferried to an Israeli ship waiting outside Sudan waters.
One night, while the dinghies were being loaded with refugees, a patrol of Sudanese soldiers started shooting at the group, believing they were smugglers. Israeli “chutzpah” was put to the test. One of the operatives shouted angrily to the soldiers that they were taking boatloads of tourists on a nighttime diving trip – how dare the patrol shoot at them! The confused soldiers even apologized for their mistake.
Since the marine rescues were becoming too dangerous, the Mossad found an abandoned airstrip in the desert large enough to land a Hercules transport plane - to airlift the refugees out of the country. Most of the Ethiopian Jewish refugees had never seen a truck before let alone a plane! However, the belief that one day they would go to Jerusalem “on eagles wings” [Exodus 19:4 ], encouraged them to climb aboard the giant, featherless bird bound for Israel. 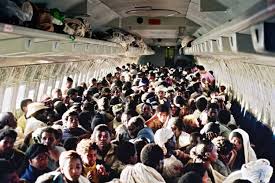 Operation Brothers came to a sudden end in the spring of 1985 when its cover was blown. Overnight, the “Swiss staff” disappeared from the resort and were extracted by a Hercules aircraft deep in the desert. Other operatives, stranded in Khartoum on a similar mission, were “mailed” to Israel in diplomatic mail crates.
Over the course of Operation Brothers, more than 6,000 Ethiopian Jews had been rescued.
For more than 30 years, “Operation Brothers” remained virtually unknown. Then in 2007, one of the Mossad operatives who took part in the operation, Gad Shimron, brought the story to light in his book: “Mossad Exodus”. It has recently been made into a film.
The magnitude of the mission emphasized the bravery of the men and women tasked with an impossible assignment to save their “brothers.” However, according to Shimron, it was the silent, stoic Ethiopian Jews who showed the greatest courage…….

Posted by Haifa Diarist at 9:44 AM No comments:

(In an extensive analysis of the two way cooperation between the USA and Israel, my friend Charles Abelsohn  writes that unlike the perception that aid to Israel is one way only, the spin off for the USA cannot be underestimated)

Let`s look at several of the mind boggling Israeli military contributions, conceived, designed, manufactured and operated by an Israeli army which, a mere 70 years ago, in May 1948, had little more than out of date rifles and home made bullets, as the world, Czechoslovakia excepted, embargoed arms and ammunition to Israel in its hour of greatest need. Perhaps it was this embargo that initiated Israel`s own military industry.

Israel may have recently surpassed the fiction of Star Wars. This year, in July 2019, Israel`s conceived, designed, manufactured and operated, and U.S.-backed, Arrow-3 ballistic missile shield passed a series of live interception tests over Alaska. The performance was perfect - every hit a bull’s eye.

Jointly manufactured by U.S. firm Boeing Co and Israel, Arrow-3 is billed as capable of shooting down incoming missiles in space, at an altitude that would destroy any non-conventional warheads. It passed its first full interception test over the Mediterranean Sea in 2015 and was deployed in Israel in 2017.

America rarely purchase weapons systems from foreign countries due to national security considerations, and Israel is among only a small handful of countries from which the U.S. occasionally buys defense technologies.

Israel`s best known missile defensive system is undoubtedly the Iron Dome. The Iron Dome provides coverage against rockets with ranges of between 5 kilometers (3 miles) and 70 kilometers (43 miles), as well as shorter mortar rounds. The system uses small interceptor missiles to shoot down incoming threats assessed by a computer as likely to hit a populated area. Iron Dome ignores rockets likely to fall in an open area. According to Israeli and U.S. officials, Iron Dome has had a 90% success rate in engagements on the Gaza border.

The U.S. Army is now planning to buy a number of Iron Dome missile defense systems from Israel as a system which is able to protect deployed U.S. military service members against a wide variety of fire (ground) threats and aerial threats.

Recently, the US military awarded a multi-million contract to an Israeli entity for the purchase of an Israeli-developed missile defense system, known as the Trophy, to protect United States tanks and armored personnel carriers from missiles and rockets. The system is made up of a radar detection system that spots incoming missiles and predicts their trajectories, and launchers that fire buckshot-like metal pellets, which cause the incoming missile or rocket to detonate away from the tank. I doubt whether science fiction conjured up this scenario.

By now the Israel in America technological development contribution to the US military is clear. It exists in many other areas of the military such as but not only aircraft systems, communications, radar and robots.

Posted by Haifa Diarist at 8:43 AM No comments:


What happens when surgery meets augmented reality, lasers and robots?
Let's just say incredible possibilities for the world of medicine.

From robots that can perform spinal surgery, to augmented reality
helmets which provide doctors with a wealth of information during
procedures, to platforms that can analyze millions of scans and diag
nose patients, these three Israeli technologies are saving lives and
bringing us one step closer to discovering
the next medical breakthrough.

Posted by Haifa Diarist at 1:20 PM No comments:

Cross posted from  Afternoon Tea in Israel  (Thanks to Michael Horesh)

I have had my complaints about how the Israeli economy has been managed over the past year. And there are still several unfavourable signs. However, it is now time to stand up and to salute a success, an achievement which other countries could be jealous about.
You see it is not just that Israeli exports have risen 3% in the first half of 2019. The two key points are that:
Cautionary note: Israel’s exports are dominated by 10 large companies such as Intel. The latter had held up production in 2018. And there was a particularly large one-off contract to the UK in the chemical sector.
In any event, given the global worries over downturns, this is a very impressive performance. And this is one of the key reasons why Fitch, a credit rating agency, still grades Israel at A+
Posted by Haifa Diarist at 6:53 AM No comments:

“Iran is stifling a United Nations probe of its alleged storage of nuclear equipment and radioactive material in Tehran,” reports the Wall Street Journal, citing diplomats as their source.

“Iran has refused to provide answers to important questions raised by the U.N.’s International Atomic Energy Agency (IAEA) over allegations that Iran had established a now-dismantled site in Tehran to store equipment and material used during past nuclear weapons work,” say the diplomats, according to the newspaper report.

It is the first time Iran seems to have refused to cooperate with the IAEA’s monitoring of its activities since the nuclear deal with six world powers was implemented in January 2016, says the Wall Street Journal.

On Friday, The Washington Free Beacon reported that an “upcoming report” by the IAEA “includes new language suggesting the Islamic Republic has not been cooperating with international nuclear inspectors who are mandated to provide oversight on the Islamic Republic’s weapons program.” The news outlet cited multiple sources familiar with the contents of the report.

The Washington Free Beacon,stated that the report was said to show that Iran “has stopped adhering to its transparency commitments under the landmark Obama-era nuclear agreement.”

For his part, Iran’s President Hassan Rouhani charged Tuesday that European countries are failing to implement their commitments following the U.S. pullout from the 2015 nuclear deal with Tehran.

Iranian state TV quoted Rouhani as saying that the Europeans “did not carry out their task.”

The comments come as Iranian diplomat

Posted by Haifa Diarist at 8:45 AM No comments:

This week, however, ahead of the 90th anniversary of the August 24 massacre that decimated Hebron’s ancient Jewish community, Kiryati opened his door to journalists. He is the last known survivor of the massacre who can still recall the fatal events of that day, in which Arab rioters killed 67 Jews.

Posted by Haifa Diarist at 10:25 PM No comments: