“UNRWA is fully controlled by Hamas,” warns
a senior researcher at Tel Aviv’s Institute for
National Security Studies.
Posted by Haifa Diarist at 8:50 AM No comments:

For more than a decade, scientists have dreamed about the seemingly endless possibilities of messenger RNA (mRNA).

Now, the world is likely to have two anti-coronavirus vaccines based on mRNA technology to help slow the aggressive pandemic that has killed 1.4 million people.

In Israel, researchers at Tel Aviv University are using a similar technology as Pfizer and Moderna to target cancer cells and genetically neutralize them, increasing overall survival rate.

“Cancer genes are responsible for the proliferation of cancer cells,” Peer said. “We want to cut those genes, so that they will not be active anymore and they will destroy the cancer cells forever.”

But he said that the challenge has been to deliver those “scissors” into the right cells without touching healthy cells – “you don’t want to edit the genome of a healthy cell and kill it.”

In this most recent experiment, the research team targeted two types of cancer: glioblastoma, the most aggressive type of brain cancer, with a life expectancy of 15 months since diagnosis and a five-year survival rate of only 3%; and metastatic ovarian cancer, a major cause of death among women and the most lethal cancer of the female reproductive system.

“It must be emphasized that this is not chemotherapy. There are no side effects, and a cancer cell treated in this way will never become active again. The molecular scissors of Cas9 cut the cancer cell’s DNA, thereby neutralizing it and permanently preventing replication.”

Cancer research is still in its infancy. However, “by demonstrating its potential in treating two aggressive cancers, the technology opens numerous new possibilities for treating other types of cancer as well as rare genetic diseases and chronic viral diseases such as AIDS.”

Human trials are expected to start within the next 18 months to three years.

For more on this story read here .

Posted by Haifa Diarist at 8:40 AM No comments:

Students at a Palestinian Authority school, funded by the European Union and an Italian NGO, have put on display an exhibition that erases Israel from the map and celebrates the rockets recently fired by the Hamas at Israel during Operation Guardian of the Walls last month, reported Palestinian Media Watch.

Photographs of the exhibition posted by Fatah’s Nablus branch on Facebook last week show a poster featuring a rocket next to a map of "Palestine" which included all of Israel.

The rocket has “Ayyash 250” written on it, in reference to one of the 4,300 rockets Hamas and other Gaza-based terrorists fired at Israel’s population in May, while the map was painted in the colors of the Palestinian flag, stretching from the Jordan River to the Mediterranean Sea.
And the EU has not woken up to the ongoing incitement.
Posted by Haifa Diarist at 12:20 PM No comments:

•   It is hardly surprising, then, that the most recent public opinion poll showed a dramatic surge in the popularity of Hamas among Palestinians. What should be surprising -- and disturbing -- is that the Western world is directly aiding and abetting this bloody shift of allegiance.

Posted by Haifa Diarist at 9:44 PM No comments:

There was yet one more action incited by Hamas, an action of serious –
and yes, very infuriating – dimensions:

There were incendiary balloons launched into southern Israel – with
fires ignited on farmland and fields.

You can see a short video of one of the fires here:

This vile destruction arouses very justifiable anger. There was one balloon
carrying an explosive device, as well.

And here the situation is more serious. For after the recent war with Hamas,
Netanyahu warned that we were entering a new time: no level of aggression
would go unanswered. Not even incendiary balloons. Gantz – who
was Defense Minister then and is now – said that Israel would respond
forcefully to any act of aggression. And Bennett is on record as well
regarding the necessity of treating incendiary balloons like rockets.

Posted by Haifa Diarist at 9:01 AM No comments: 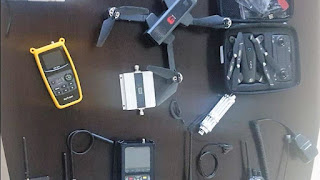 The equipment was captured at the Beituniya crossing near Hebron, the only checkpoint for the transfer of mail between Israel, Judea and Samaria, the Gaza Strip, and abroad.

So much for efforts to promote "Peace"

Posted by Haifa Diarist at 11:30 AM No comments:

“They Were Only Children”

On May 28, 2021, the front page of the New York Times published pictures of children and adolescents killed in the Gaza Strip and Israel during Operation Guardian of the Walls with the headline, "They Were Just Children." The Times listed the names of 67 children under the age of 17 who were killed, two in Israel and 65 in the Gaza Strip.
A few days later the Times printed a retraction, reporting that one of the pictures was of a child killed under other circumstances and not during the hostilities.
However, it was not the Times' only inaccuracy. An Intelligence and Terrorism Information Center examination of the list revealed that the name of one of the children belonged to a Hamas military-terrorist wing operative. He was Muhammad Sabar Ibrahim Suleiman, 16, killed on May 11, 2021, in an attack in the eastern part of Jabalia along with his father, a commander in Hamas' military-terrorist wing (the Izz al-Din Qassam Brigades)
A video issued a few days after the end of the hostilities shows Muhammad Sabar Ibrahim Suleiman wearing an Izz al-Din Qassam Brigades uniform and learning to shoot a machine gun and other weapons. The instructor next to him is also wearing an Izz al-Din Qassam Brigades uniform (@DigFind Twitter account, June 1, 2021). Thus despite his young age, he had been recruited by Hamas to its military-terrorist wing.
Another Gazan boy, who according to the New York Times list died in  Operation Guardian of the Walls, was found to be an operative in  Hamas' military-terrorist wing. The Times' list also included the names  of eight children who were killed by terrorist organization rocket  misfire.
Previously, Khaled Imad Khaled al-Qanua (Abu Suheib), who was identified by the New
York Times as a 17 year-old boy, was found to be a 20 year-old terrorist operative. He
was killed on May 13, 2021, in an aerial attack on a Palestinian terrorist squad near Beit
Hanoun in the northern Gaza Strip. The Mujahedeen Brigades, the military-terrorist wing of the Mujahedeen Movement, whose leadership split from Fatah and are today allied with the Palestinian Islamic Jihad and close to Iran, issued a mourning notice stating he was an organization operative and 20 years old (Mujahedeen Brigades' Telegram channel, May 13, 2021).
At least eight of the children whose names were on the list were killed by terrorist
organization rockets that misfired and fell inside the Gaza Strip on May 10, 2021:
Baraa al-Ghrabi, 4, from Jabalia.
Ibrahim Hassanein, 16, from Beit Hanoun.
Mustafa al-Abir, 17, from Beit Hanoun.
Hussein Hamad, 11, from Beit Hanoun.
Yazen al-Masri, 2, from Beit Hanoun.
Marwan al-Masri, 7 from Beit Hanoun.
Ibrahim al-Masri, 11, from Beit Hanoun.
Rahaf Muhammad Atallah al-Masri, 10, from Beit Hanoun.
Most of the remaining 55 were killed when the IDF attacked terrorist targets and the
children were either on site or nearby. Some were related to terrorist operatives who or
whose houses were the targets of IDF anti-terrorist attacks. Some were killed when two
buildings collapsed after the IDF attacked terrorist tunnels close to their foundations. Hamas used the tunnels as command centers, to store weapons and as hidden passageways for operatives to move between posts.
The IDF carried out about 1,500 aerial attacks, and despite its efforts to avoid harming
civilians in general and children in particular, Hamas' tactic of positioning its command
centers in the heart of densely populated areas led directly to the unfortunate deaths of
more than 50 children. At least 120 non-combatants (including the children) and 111 terrorist operatives from the various organizations were killed in the IDF strikes.
After Operation Guardian of the Walls, Yahya al-Sinwar, head of the Hamas political
bureau in the Gaza Strip, admitted that positioning the terrorist headquarters in civilian
structures was "problematic," and by implication led to civilian casualties (al-Jazeera,
June 5, 2021)

Posted by Haifa Diarist at 5:38 PM No comments:

A Humane Army - That's the IDF The Palestinian men were throwing stones across

the border in Israel. The soldier fired a shot in the

air to disperse the crowd away from fence. The

crowd retreated but pushed the girl towards the

fence take a video shot from other side to publish

it in news that Israeli soldiers confronting a little girl.

But my teammate he saw the girl was scared and

instead of running back she ran towards the soldier

she was bleeding and bruised. The soldier offered

her water then called the paramedics to treat her

wounds. We are taking care of her at our local hospital.

We announced on loudspeaker later on so that the father

can come and take his girl. We are still waiting her parents

But remember we Israelis are bad people.
Posted by Haifa Diarist at 10:39 PM No comments: