US Funds Arabs Who Want to Destroy Israel

Posted by Haifa Diarist at 11:49 PM No comments:

A pro-“palestinian” resolution at the UN recently declared Israel’s founding unjust passed 90-30 at the UN.

The resolution was made to commemorate Nakba day, which means calamity – referring to the founding of the State of Israel.

The UN resolution calls for a “commemoration of the seventy-fifth anniversary of the Nakba, including by organizing a high-level event at the General Assembly Hall” in May 2023. It also urges the “dissemination of relevant archives and testimonies.”

So why is there no voting commemorating the Jewish Nakba when almost 1 million Jews were kicked out of Arab lands?

See chart below just how many Jews were kicked out of Arab lands. Is this not the real ethnic cleabsing? 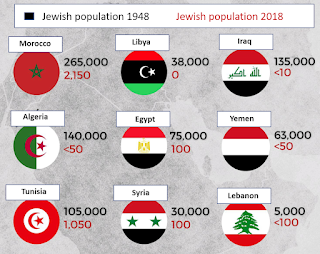 Posted by Haifa Diarist at 4:11 PM No comments:

( With thanks to Alma Israe https://israel-alma.org)

The search for #Hezbollah activity in #Lebanon continues through eyes on the ground. Here's what was found in the village of Hadath in the #Iranian proxy-controlled Beqaa Valley.

Posted by Haifa Diarist at 9:44 PM No comments:

Multi Culturalism or Multi Ethnicity, Which is Positive?

Here in Israel we see ongoing changes in the demographics of the European countries and also those in the Middle East.

The findings of the recent 2021 census for England and Wales reveal a country that is changing dramatically.

The results of the 2021 census compared those of 2011 show stark changes which ought to ring alarm bells with the UK policy of  almost unlimited immigration.

There is a continuing decline of Christianity within the UKi. For the first time, fewer than half the population of England and Wales identifies as Christian, while self-described Christians have declined by 17 per cent, there has been a 43 per cent rise in the number of people who say they follow Islam.

A society only exists where its inhabitants regard themselves as bound together by a culture composed of language, religion, law, literature, traditions, customs and so on expressed through civic and political ideals embedded in the historic development of that culture. Different ethnicities can sign up to the norms established by that culture, even if they are newcomers who didn’t share in its development.  But there has to be an identifiable overarching culture to which they can sign up.

Multiculturalism, by contrast, means that no one culture defines a nation which is composed instead of a range of cultures. Moreover, multiculturalism holds that the indigenous culture cannot declare its values superior to any other. So it cannot lay down cultural norms which everyone is expected to share. Multiculturalism therefore destroys society as a body of people with a shared collective national vision.

Posted by Haifa Diarist at 6:43 PM No comments:

An Iranian propaganda video in which dozens of children sing a song that references an apocalyptic myth about massacring Jews was filmed at a school just 15 minutes’ walk from the New London synagogue in St John’s Wood, a Jewish Chronicle investigation has revealed.

Some scenes were also shot at the nearby Islamic Centre of England (ICE), which is controlled by the Iranian regime and linked to the school. ICE is currently the subject of a statutory inquiry by the Charity Commission, as the JC disclosed last week.

The song, entitled Hello Commander, has been praised by Iran’s Supreme Leader Ayatollah Ali Khamenei, who claims its popularity proves his people’s “loyalty to the system”, Iranian pro-regime media has reported. Its recording in St John’s Wood, in easy reach of several synagogues and Jewish centres, has raised serious concerns among community security officials.

In the London video, rows of boys in white shirts and pressed black trousers and girls in blue flares, white blouses and matching hijabs can be seen saluting and singing their allegiance to their “commander”, Ayatollah Khamenei.

The children, aged between eight and 15, sing: “Without you, this life has no meaning. This life comes alive when you are here for me.”

They then sing about fighting in history’s final battle for the mythical leader known as the Mahdi, last seen supposedly almost 1,200 years ago.

Shia theology says the Mahdi will return to Earth to lead Muslim forces in the war of the apocalypse, accompanied by an elite band of 313 fighters — including, the song suggests, the children in the video.

They sing: “We wait for under the flag of our leaders. Tell me beloved, will you arrive soon? May Allah hasten your reappearance…

“We may be young but do not see us as too young. For you I will rise up and you will not see me fall. From the 313, you will see I will answer the call… Take my oath of loyalty as a warrior and servant.”

Kasra Aarabi, the head of the Iran Programme at the Tony Blair Institute, told the JC that the “cult” of Mahdi doctrine is now driving Iranian regime policy and its attempts to radicalise Shia Muslims. “It is antisemitic to its core”, he said, “because it holds that before the Mahdi can return, Israel must be destroyed and all the world’s Jews put to death”.

The ICE’s constitution stipulates that one of its trustees will always be the UK’s personal representative of Ayatollah Khamenei.

Versions of the song recorded in Iran and elsewhere dominate the country’s official airways.

A report by the pro-regime Iran Press News Agency states: “Hello Commander educates the new generation on the ambitions of the Islamic Revolution and encourages them to be guardians to protect those ideals, which is seen as a step towards promoting the revolution among the generation to come.”

The Charity Commission has warned ICE that praising Soleimani may break English law.

The school is owned by the Iranian government and ICE’s previous director Mohammad Shomali, the previous ICE director and reportedly its Khamenei representative, has spoken there.

The ICE has received £139,000 from taxpayers under the Covid furlough scheme. Meanwhile, the school’s pastoral and educational standards have been scathingly criticised by Ofsted.

Its latest inspection, in March, rated the school “inadequate”, saying it was “repeatedly failing” in areas such as safeguarding. The school’s leaders had failed to show they had the necessary “knowledge and skills” to ensure proper standards were met.

The current Charity Commission inquiry into the ICE was triggered by a speech at the centre in October by Seyed Moosavi, its present director and Khamenei representative, when he said Iranian protesters were “soldiers of Satan”.

That probe concluded with an “official warning” and “action plan” for ICE, on the grounds it had hosted extremist speakers and that Mr Moosavi’s statements may have amounted to an offence under the Terrorism Act. A Commission statement this week says that “the trustees have failed to fully comply with the Action Plan and Official Warning and a number of further regulatory concerns also remain”.

Senior MPs from both main parties said the probe into the ICE must be conducted with utmost rigour. The former Tory Defence Secretary Liam Fox said: “We are much too tolerant of extreme Iranian sympathisers spreading the bile of their theocratic regime and we should be closing down their propaganda outfits in the UK and Europe.”

ICE told the JC: “In Shiite text, the followers of the 12th Imam [the Mahdi] are referred to as his disciples and companions and preparing them to reach that spiritual status is a process that is highly encouraged.

Posted by Haifa Diarist at 7:48 PM No comments:

Terrorists kidnap body of the Druze Israeli - returned to family

The mainstream media and government is reporting “The body of Tiran Fero, a young Israeli Druze, was returned after being kidnapped by terrorists from his hospital bed who disconnected his life support resulting in his death.  Israel's outgoing Defense Minister Benny Gantz thanked the Palestinian Authority for facilitating the body's return.  "I would like to express my appreciation to the Palestinian Authority for its action to return the late Tiran Fero to his family. This is a basic humanitarian step after a vile and inhuman act.”

NOW HERE’S WHAT THE MAINSTREAM MEDIA FAILED TO REPORT…
— The uncle of the young man told the IDF that he DID NOT want any Israeli soldiers placed at risk to retrieve the body, he can wait a day or two.
— The Druze community rallied in the thousands, marched on Jenin, blocked the checkpoint, with many armed and firing in the air .
— Several groups of Druze gunman kidnapped several Palestinian workers and threatened to kill them if the body is not immediately returned. (In the Galil, in Hebron, and in the Shomron.)
— Druze militants threatened to march on Jenin and kill their way through the city searching for the body.
— Their spiritual leader Mufak Tarak requested the community to calm down and give negotiations a chance.
…a short time later the body was returned (around 2am).
Posted by Haifa Diarist at 3:57 PM No comments:

Israel condemned Ukraine’s decision to vote in favor of an anti-Israel resolution at the United Nations last Friday, as Kyiv continues to pressure the Jewish state to provide it with advanced weaponry.

On Friday, Israeli ambassador to Ukraine, Michael Brodsky, took Kyiv to task after the Ukrainian delegation to the United Nations voted in favor of a draft resolution in the General Assembly’s Special Political and Decolonization Committee backed by the Palestinian Authority’s delegation.

Brodsky took to Twitter shortly after the vote, calling Ukraine out over its U.N. vote.

The resolution, accused Israel of denying Palestinian Arabs the right to self-determination, negated Israel’s historical connection to the Temple Mount, and urged the International Court of Justice (ICJ) to render an opinion against Israel’s presence in Judea and Samaria.

The draft resolution, entitled “Israeli practices and settlement activities affecting the rights of the Palestinian people and other Arabs of the occupied territories,” claims Israel has violated ‘Palestinian rights’ to self-determination “from its prolonged occupation, settlement and annexation of the Palestinian territory occupied since 1967, including measures aimed at altering the demographic composition, character and status of the holy city of Jerusalem, and from its adoption of related discriminatory legislation and measures.”

It would ask the court for an opinion on how these Israeli policies and practices “affect the legal status of the occupation, and what are the legal consequences that arise for all states and the United Nations from this status.”

The call for a new opinion was one of six Palestinian-related resolutions approved by the committee on Friday.

The court’s opinions are non-binding.

Ukraine’s support for the resolution comes as Kyiv continues to press Jerusalem to transfer the Iron Dome missile defense system and other weapons to Ukraine.

Posted by Haifa Diarist at 11:09 PM No comments: